Two Political Thrillers – Historical Fiction
One for Democrats, One for Republicans

In the fall of 2020, COVID-19 continues to kill. Many blame China.
America is about to pick a president to lead the country through the conflict with China.

YOU must choose the president to lead through WAR 19. 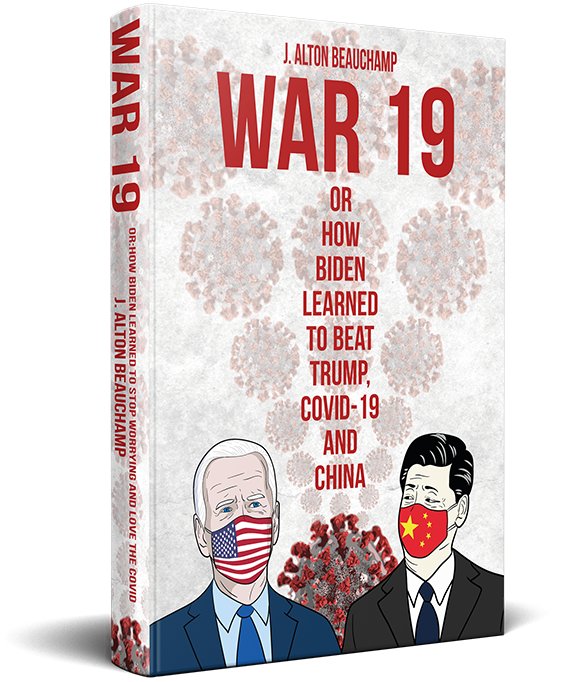 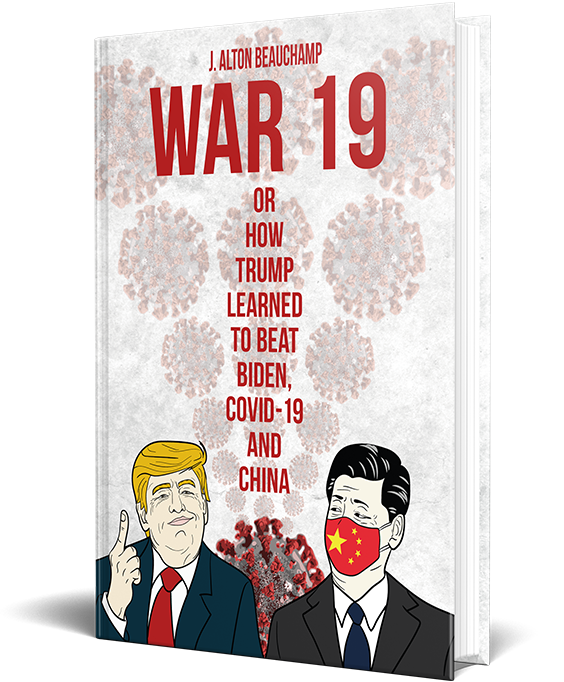 “I have read all of the accounts of the war, and despite the unusual style, I found this to be by far the best recounting of the events.”
– George Bush IV

“This is the most complete, unbiased account of the war. All of the other books written about the war are trash compared to this!”
– Joseph B. Obama

“All other books on this topic should be burned!”
– Mitch McConnell III

“I know both my Grandpa Bill and Granny Hilly would have loved this book.”
– Jasper Clinton Mezvinsky

“This book takes the financial genius of granddad Warren and combines it with the creativity of Granddaddy Billy! The perfect read for fall 2020.”
– William Gates Buffett

“These War 19 historical fiction books are the best fun reading we Jupiterians have seen since the Perth Plague of Palros book series!”
– Found on a monolith on the moon

“If I had a body, I would read these books. Instead, they just downloaded them into my brain, but I LOVED them!”
– The head of Elon Musk

In 2071, to commemorate the 50th anniversary of the war between China and the United States, the United Nations published the definitive account of the war. China expert and former White House Chief of Staff J. Alton Beauchamp was selected to write this account.

Dr. Beauchamp decided the best way to present the story was to select articles from the period. They when taken as a whole, as a mosaic, tell the entire story. The selection of the articles was his and his alone.

This is a two-book political thriller series, one if Trump wins reelection and one if Biden wins. Full of suspense, mystery, political satire and humor, this historical fiction answers the questions you have been dying to know! One book is sure to thrill you and one book will make you want to burn it!

This book has it all! Political humor, satire, fun historical fiction. A great alternate history to satisfy your every political dream!

Read both of these exciting political fictional thrillers about how Trump and Biden battle and the winner faces off with COVID-19 and China!

Dr. J. Alton Beauchamp was born in 2022, just months after the conclusion of the war between China and the United States. He grew up in Beijing. His father was a senior-level diplomat in the American Embassy there and his mother the daughter of a wealthy Chinese industrialist.

He graduated Harvard at the age of 19 and Harvard Law at the age of 21. He completed his PhD. dissertation in post-war studies at the University of Beijing in 2046. A commercialized version of his dissertation became the best-selling ‘Understanding the New China’ which remained on the New York Times bestseller list for 21 weeks.

At the age of 30, he became a full professor at Stanford University in the Asian studies department. In 2056, he orchestrated and led the successful reunification of the two Koreas. He subsequently served as ambassador to Korea and then China, completing the circle by living in the same house in Beijing where he grew up.

President James Carter, the great-grandson of President Jimmy Carter selected Beauchamp to serve as his Chief of Staff. Serving for both full terms, he became the longest-serving Chief of Staff in American history.

His family traces its lineage to William de Beauchamp (of Elmley), c1105–c1170. He was an Anglo-Norman baron and sheriff and was the first Beauchamp to become Earl of Warwick. Earl of Warwick is one of the most prestigious titles in the peerages of the United Kingdom. Sir Edward Beauchamp (Liberal Party Member of Parliament), Lady Evelyn Beauchamp (one of the first people in modern times to enter the tomb of Tutenkhamun), George Beauchamp (American inventor of musical instruments and co-founder of Rickenbacker) and Sailor First Class George Beauchamp (Titanic survivor) are all direct ancestors.

Alton Beauchamp was the unanimous selection by the United Nations to write this definitive history commemorating the 50th anniversary of the war.