Q: What is the book about?
A: The book War 19 is about the war between the United States and China, the People’s Republic of China. The war started just after the election of 2020 and continued into 2021.

Q: Who commissioned the book and why?
A: The United Nations Committee on Peace History commissioned the book to celebrate the resolution of the war. The vote authorizing the search for an author was 19-0. The Committee established 37 criteria for the selection emphasizing inclusion, diversity, transparency, openness and honesty. They spent 3 years and $18 million during the selection process. At the conclusion of the process, the Committee awarded the project to the Committee’s own Chairperson, J. Alton Beauchamp.

Q: Wasn’t the Committee concerned that selecting their Chairman would look inappropriate?
A: No, no they were not concerned about appearances. Members of the United Nations understand they are above the law, public opinion, or any set of morals. It is very similar to the wisdom of putting the Sudan and Myanmar on the Human Rights Council.

Q: Aren’t there in fact two books?
A: Yes, there are two versions of history, so the Committee authorized two versions of the book. In one book, Trumps win the election. In the other, Biden wins.

Q: Isn’t that impossible?
A: Well, yes Einstein, it is impossible to have 2 versions of history. But, it is also immoral to have a history that would in any way offend anyone. Therefore, 2 versions were written, one for Democrats and one for Republicans.

Q: Wait, wait. How can a book written in the future be available now, in the summer of 2020, before a war even started? And there aren’t 2 versions of history!
A: Just go with it and enjoy the books….

Q: Wait a minute. Wait! None of this makes sense! History can only have one version and books do not appear from the future!
A: I see you have a very small view of the world.

Q: Let’s move on. How did you select the articles that tell the story?
A: I hired two sexy interns and let them do it.

Q: That’s sexist.
A: How? One was male and one was female. Both were gay. One was true transracial.

Q: True transracial?
A: Yes, in the year 2060 or so, race transplants become popular.

Q: Race transplants? You mean someone changing races?
A: All the rage! You’d never guess the most popular color! Its not what you think!

Q: Ok, wait. You let the interns do all the work? But you took the credit? That’s horrible! Do you even know their names?
A: The interns’ names? No, I don’t know their names. Bob? But yes, they had an exhaustive process and spent lots of hours reading lots of sources. Lots of process and sources.

Q: But they did all the work?
A: I did write the epilogue, the conclusion. Well, I told them what I wanted it to say.

Q: So, they did all the work and got nothing?
A: Not nothing! They wrote each other letters of recommendation, and then I signed them.

Q: The letters? All you did was sign the letters? And get paid? That’s it?
A: They used my name and I am the one that knows how to get the book from 2071 back to voters before the 2020 election! The voters need to see what happens!

Q: If Biden or Trump wins?
A: Two books! Remember!

Q: There is a universal currency in 2071?
A: Of course, there is only one country, so one currency.

Q: Gee, thanks. So, in the end, the two versions of history, are they dramatically different?
A: That is one of the major lessons. I can’t spoil the end, but the hero is the same in both books.

Q: A James Bond figure?
A: No, not at all. No 007. There is however, a hero. A hero that all the readers know well. Or should know well. Maybe this will help them know the hero more intimately.

Q: On another topic, the covers of both books have received accolades. Where did the idea for the covers come from? 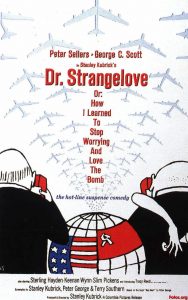 A: Yes, I love the cover design! Our cover was inspired by the movie poster for Dr. Strangelove, a great 1964 Stanley Kubrick movie. The movie, starring George C. Scott and Peter Sellers, is a dark comedy film that satirizes the Cold War worries of a nuclear conflict between the Soviet Union and the United States.